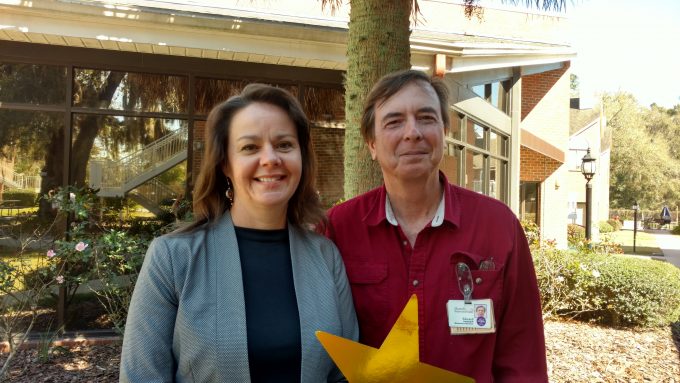 Ed Vandegrift, a maintenance mechanic, has been working at FRC for nearly five years. His job involves a little bit of everything; he’s the resident construction worker, fixer-upper, maintenance man, mechanical expert and all around good guy. Executive Director Roxane Harcourt said during the award ceremony, “Ed is one of those people who just cannot be replaced. He works hard and he does things around here that no one else can do.” Ed was spotlighted for his work on a recent office renovation during which he had to work around and very closely with five call center staff members. It was a very complicated job, and Ed completed it with a smile. “Ed never complains, no matter the task,” Harcourt said. “We appreciate all he does, his great attitude and his great work!”

Kris Arana, M.S., is a therapist at FRC. She received a Shining Star Award for her work with a former patient who came to her for urgent help a few months ago. Kris responded with kindness, compassion, patience and resolve. “She showed the utmost professionalism in a very difficult situation,” Harcourt said. The incident took time and effort, and Kris handled it all with an outstanding attitude. After the incident, the patient sent a letter of gratitude and said that Kris was a huge help in a major time of need.